As some of you may know, three years ago I started a recreation of ALW's Phantom in a game called Second Life. This past year, we actually opened the show to amazing success in this game and we are even now shooting a sort of trailer for it. I thought I'd share some things from it here for you all and possibly open the doors to discussing Phantom being created in digital environments

Inspired by the 1910 gothic horror novel by Gaston Leroux, Andrew Lloyd Webber composed his most successful musical sensation to date, The Phantom of the Opera. With hauntingly beautiful music and an aesthetic visual design matching the regal splendor of the original Palais Garnier, Phantom has captivated audiences the world over. Celebrating its 25th anniversary, the talented members of the Ravenswood Theatre Company bring this extraordinary event to Second Life!

The origins for this production can be traced back to two talented and passionate individuals: Sylent Phantom and Alexia de Ravenswood. As long time fans of the original novel and the Webber musical, they were moved to bring elements from both works into Second Life, and to seek the creations of others who had done similar.

One significant discovery was that of the Phantom Rose sim, owned and created by Lannorra Sion. It was here that they discovered the possibilities of theater and live performances in Second Life. After attending a performance at the sim’s Opera House, the idea of recreating the musical production seemed quite within the realm of possibility.

In early 2010, Alexia became friends with Saros Eclipse, having met through a furry musicians group. As a gift, Saros purchased a re-creation of the Apollo Theater for Alexia. With this theater space in mind, Sylent and Alexia began to make sets based on the Webber stage production. After meeting Alessandra Eberlain in late 2010, she was invited, along with Jareth Clowes, to join in on the development of the show, helping to expand on existing sets, and creating some new additional set pieces with a new theater in mind, CASTLEWORLD’s Grand Opera. Due to real life circumstances that arose, followed by the loss of Saros’s sim in February 2011, the production soon came to a halt.

Alexia and Sylent soon found a new home in Jaguar Valley. Through the local community, they met Allen Harrington, who agreed to construct a new theater based on Alexia’s designs, dubbing it Ravenswood Hall. With Andrew Lloyd Webber’s recent adaptation coming out in the West End, Alexia decided to put together her own production of The Wizard of Oz for her company’s debut. With sets built by Kelemvor Nostram, and acting and singing recorded by the cast, the preview performances at the end of March 2011 were met with much success. But Alexia felt a yearning to do more with her theater, and decided to return to the production of Phantom.

From the moment one enters the auditorium up until the final curtain, The Phantom of the Opera is an amazing spectacle to behold. With contributions to scripting by Marjan Tomba and Tursi Jackson, and calculated use of the HORIZONS Holodeck, the settings for the story transition fluidly from scene to scene. Excellent lighting and special effects complete the package. From the rise of the chandelier during the Overture, to the incredible fireworks display during the Entr’acte, the production offers many impressive and captivating illusions.

Allen Harrington, Kelemvor Nostram, and Kefir Lamont aided in upgrading many of the sets to fit the new Ravenswood Hall, drawing inspiration from the Palais Garnier itself, in addition to various productions of the Webber musical, such as the Las Vegas Spectacular, the original London production, the Polish and Hungarian productions, and even the recent 25th Anniversary concerts. Every scene is elegant and grand in design, luring the audience into its conjured world, from the rooftops of the opera to the Phantom’s dark realm below.

Various forms of animation also help to bring the performance to life. Gestures, AOs, HUDs, and pose balls are all utilized to the fullest extent. Notable among these are Sylent Phantom’s poses, newly redesigned and animated for the production, as well as two major animated sequences created by Electra Karsin. Combined with months of dedicated rehearsals, the cast are able to effectively express reactions and emotions with practiced movement.

The choice to have the characters portrayed with furry avatars was inspired by two sketches drawn by Sylent Phantom in the 1990’s, which had been shared with Alexia in 2001. When asked about the furry cast, Alexia stated, “I find that furries are some of the most heartfelt and deepest people I have met, not to mention some of the wittiest and most talented critters. Doing it with furries adds a sort of tenderness to it that most people who are not animal lovers would not see. I think that animals are in some ways more sensitive than people.”

The cast is made up of a collection of friends from the Phantom community and Second Life. Each member successfully conveys the thoughts and feelings of their characters to the audience with surprising ease. Through the cast’s efforts, the audience is moved to laugh at their humor, cry for their sorrow, and feel warmth in their hearts for their love and tenderness.

Alexia had originally considered having the cast record their voices as with the Oz production, but felt that the recordings would not be completed by the initial deadline of August 2011. Thus, the current audio is a recording of the 2007 Australian cast, with edits by Alexia to improve quality and tone, and to fit some revisions to certain scenes. It is an excellent supplement to the production, blending well with the cast and sets to create a truly authentic theater experience.

The Phantom of the Opera is a truly unique production, redefining live theater with an experience that will amaze and astound you. Brought to you by the Ravenswood Theatre Company, Phantom is a musical masterpiece that should not be missed! Seating for the performance is limited, so please contact Alexia de Ravenswood (née Alexiel Czazckes) for reservations, or join the Ravenswood Theatricals Fans group for information on upcoming performances. 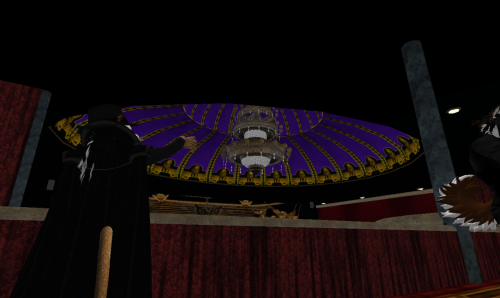 Thank you Raph, there will be video very soon.

Awesome job on the trailer! And hey, I think I see myself there.

OMG! How did I not notice this before? awesome!!! Is this still running in Second Life? I don't know if I can even access SL. But this would be worth trying it for! Wow!