Auditioning is very easy- just chose a part that you think would interest you, record yourself reading a few lines from the book, and e-mail the recording to the Phan who is heading the project.

If you aren't interested yourself perhaps you could spread the word to others who you feel might want to audition for a part.

I'm the phan who started the Online Phan Audio Recording Project, which the former poster mentioned.

The project came about after I noticed phans were asking for more complete audio readings from various YouTube posters who had made audio excerpts from the various literary adaptions. I thought why not do a complete recording of Gaston Leroux's novella - only this time it would be made and recorded by the phans themselves and it would then be uploaded onto Soundcloud and YouTube, along with an updated trailer including the chosen voices.

Basically, the project is this:

Phans can audition to play the various roles from the Gaston Leroux novel and, in order to avoid bias, there will be two judges - one
male and one female to select the leading roles. The female judge will pick out the male roles and the male judge is to pick out who will
play the female roles.

All Phans are welcome to audition, although it IS encouraged to try out for more than one character (in order so that if they do not get
the role they wish to play, they still have a chance to try out for other characters - if they wish to) and the only limitation, depending on
the character, is to record between 3-6 lines of dialogue from the original novel. In regards to which version of Gaston Leroux's novel to
read from, there is no restriction, but if phans don't have a copy - they can read the online De Mattos translation in English.

For the audition process, people don't have to be too fancy with recording equipment - this is just to give the final judges a general idea
as to who would be the best voice for which character, etc. At the very least, the recording should be audible to the general ear or via
headphones. (Once the actual recording begins, then the recording quality has to be kicked up a few notches)

Once all the voices are cast to the characters, then "things will get interesting" (i.e - the actual recording will begin).

For the sake of convenience, and this is to all of the phans, if you would like to submit audition recordings, you can either send them via
two ways -
1) Email - Send me a message via the forum for the email address
2) Via Skype - Search for emilysoprano84 and 'add' me and you can send the file that way

When recording, it would be preferable if the audio recordings format is in mp3; AVI; WAV; or mp4. But if you can not do those formats,
you can use whichever one works. Lastly, you can use any recording medium you would like - either via microphone or digital camera
video recording.

So far, there have been three phans who have already auditioned (yay!) and there has been some interest from a few phans ("in the wings") who are either currently in the process of recording their audition excerpts or working out scheduling conflicts in order to audition. Until the audition deadline is up on September 13th (which should give plenty of time for phans to record and submit their material for the audition) - all the characters are open to audition for.

Here is a compiled list of characters with lines of dialogue for the audio phan recording.

Lastly, just to prove that this is no joke, here is a teaser trailer that was made to headline the project with included links to the PhantomReviewer forum for updates in regards to the project.

Omg where do I audition? 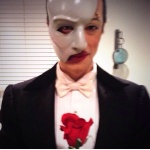 I auditioned for several parts. Just make a recording of your voice reading a few lines of a character that interests you and send it to emilygreene1984@gmail.com

We'd love to have you!

I would love to do this

do you know if I am supposed to read from the book or the play for my audition? I'm going to be auditioning for Carlotta

Read some passages out of the novel. Right now I don't think it would matter which translation you use.

mesadalas is correct. You can audition for how many parts that you'd like. If you would like more information or updates in regards to the project, you can find them on the PhantomReviews Message Board. (Although you do need to sign up for free as a member to be able to view the updates)