What If?: Susan Kay's "Phantom" musical

What If?: Susan Kay's "Phantom" musical

Inked Alchemist brought this up in the LND thread, but instead of hijacking that thread, I figured I'd post this here.

Had ALW optioned the rights to Susan Kay's novel as the basis of a "prequel," would phans be as opposed to the idea? And if not, how would you imagine the book would be adapted to stage and skewed to be in line with the original musical's take on the tale (like writing the Persian out of the story. AGAIN.)? And let's pretend he had the good sense to end the prequel when Erik takes up residence beneath the opera house.

Any thoughts? Go ahead, have fun with it.

Ending with the Phantom going beneath the opera? It might work, but it might also be somewhat anti-climactic. It would also be an enormous challenge finding a little boy to play young Erik, especially the way he is depicted in the book. The most theatrical (for lack of a better term) part of the story, aside from Paris in 1881, is in Persia. That could be interesting.

But I don't think a prequel would be a wise choice. Especially with Kay's story. Her plot is like a huge circle. I don't think it could be cut down the middle and still satisfy an audience.

Ending with the Phantom going beneath the opera? It might work, but it might also be somewhat anti-climactic.

And see, that's the problem. I read somewhere that a musical is about the most significant moment in someone's life. You can't have two of those.

But I don't think a prequel would be a wise choice. Especially with Kay's story. Her plot is like a huge circle. I don't think it could be cut down the middle and still satisfy an audience.

Well the alternative would be to play out the entire book, but then you'd just be re-hashing what's already been done in the original. And there's no way you could fit all of that into 2.5 hours to begin with. How much time is covered in Les Miserables? Twenty-odd years? And it took them 3 hours to tell that.

I remember there was a phan who was using Kay to write her own musical. I'll have to dig that out of the woodwork to see how she dealt with the expansive storyline...

With everything there is to Ms. Kay's novel, I don't know that a musical would work. I mean, there is just so much to it, traveling across the continent, the many different sub plots and all. Perhaps focusing on one specific aspect of the story would work, but I really think Phantom, the novel, would work better as a movie or television mini-series.

I'm not sure if it would work, especially since there isn't really a climax, BUT I did actually suggest this very idea to ALW when I sent him a letter two years ago trying to dissuade him from doing the sequel. Yeah, that's how desperate I was...

Will that TV miniseries EVER get made? IIRC the rights were bought, and then nothing happened...

Goodness, I've been gone for quite a while!

The idea of a mini-series sounds great! But I fear that like so many other great Phantom ideas -- (such as *gasp* the idea of making a movie that is actually based on Leroux!) -- has little to no chance of coming to fruition. Unless...

...Anybody here got an in with a major Hollywood producer / studio? Okay...just a thought.

Spielberg still has the rights to Kay Phantom, right?

Yeah. If it hasn't come together yet, it won't. Pity that. I think it could make a very good mini-series if treated properly.

A prequel musical however. Well, I can see it being possible. But the thought of trying to find a young Erik, and making a child actor keep up with those sort of demands seems insane. The only image I keep coming back to is one of a peter-pan like treatment where the young boy is in fact played by an older woman. This thought will keep me awake for weeks.

"30-year-old-woman-erik approaches the gypsy fair with song in his heart! And is captured! With more song!" 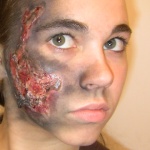 It'll probably be something that's shown on HBO/Showtime/Starz. Mainly because of a few scenes and that one scene with Christine and the pillow.

As to the question, "does Speilberg still own the rights". That can be answered with a yes... and a no.

The No:
When a movie is purchased by a company (in this case, Amblin), there are two possibilities:
A:) The movie had a deadline written in the clause.
or
B:) The movie was bought, but because it was never made, the rights for it expired.
Therefore, the movie still could be released by Universal Studios, or the rights for the film to be made expired and are still available for the choosing of a different company. There is ALSO option C:) if the company (Universal) feels there is gain to the rights, they will offer it up for sale and other companies can bid. (This happened just recently for the Terminator franchise, which was purchased by Pacificor - a holding company and Halcon - a indie film company.) But, that option usually happens when a company is in bankrupt or it folds and it has no joint company.

SO, in short: Universal now owns the rights to Phantom, but they may or may not own it now.

I´m not sure... Isn´t Kerik yet another shallow, deformed-but-sexy sociopath hero like I have read?

Sure, he travels around exotic 19th century locations, which gives possibility to gorgeous spectacle, and talented composer and lyricist could create gorgeous music but...

Similar topics
» Phantom, by Susan Kay
» "Phantom: The Untold Story" -- Susan Kay stage play in Japan
» Your chance to write a Phantom musical
» Phantom 3NT 7 December 2008: The "Full-Contact Phantom Edition (Cudia/Grant/Barisch)
» The Undergrounds of the "Phantom of the Opera": Sublimation and the Gothic in Leroux's Novel and Its Progeny by Jerrold E Hogle