I got myself to New York City to see the Broadway production for a third time (but certainly not my third time seeing the show! Haha!).

Let me start off by saying that this performance was unlike any other that I have seen of this show. There was something almost disjointed about the whole affair (perhaps the Wednesday matinee audience had something to do with it), but the show didn't lead up to the climax, rather, very much like a Chekovian piece, it felt as if the three leads were digging a hole for themselves and then suddenly a very disturbing final scene came to fruition and force them to confront their folly.

I say this because this was the first time I felt that Raoul and the Phantom equally owned the show. It became about two men who are equally obsessed with the same woman, who in the end realizes how controlled she has been by both. The final scene became a time when both men realized how they had treated this woman, and this woman seemed completely unsure of what was next in her life.

Sean MacLaughlin (Raoul) is one of the best actors I have ever seen on stage. This man is alive and present, and one can't take the eyes off of him. He is also a very brave actor, and his choice of making Raoul a playboy (I have never felt so uncomfortable in the dressing room scene!) gives him the opportunity to go on a dynamic journey through the piece. His journey was finalized when during the Final Lair, he seemed touched by the Phantom's mercy. True brilliance.

I had seen Hugh Panaro (Phantom) in the title role in December 2003. I was excited to see him in the role again because it is always intriguing to see how an actor shifts when they return after a long hiatus. His interpretation is still fuming with sexuality, but while in the 00s he was more of a champagne-like essence, Panaro has beautifully shifted into a more gruff and grounded sexuality, his age really informing his work. His Music of the Night was suggestive, to the point, and intriguing. His Final Lair was one of the finest I have seen. He was in complete control, and was not afraid to discover spontaneously....all the pain and suffering and joy in revenge was seething through him. It was actually quite scary to watch, and it made his breakdown into self loathing and yearning all the more startling.

Sara Jean Ford (Christine) is certainly a transformative and very active actress, and has one of the best voices I have ever heard in the role. She is truthful, and really brings an inner conflict and self-doubt to her portrayal. Her Christine often hesitates to open up to others (ie: I have never seen a Christine struggle so much to admit to Meg that she believes an Angel is visiting her, and the same goes for when she opened up to Raoul in the same scene). This show is, in addition to other themes, about a woman's struggle to grow up and overcome grief and yearning for what was (and I wish it was explored more in the text), and Ford committed to that in a very interesting way. That being said, I did feel that she was a bit too internal about her work for many scenes (but her Final Lair was flawless...as I said earlier, her Christine was helpless and pleading...completely overwhelmed by the outrageous-ness of what had become her life.) during this performance, and which made it difficult to go on the journey with her while sitting on the mezzanine.

I am going to be blunt about George Lee Andrews and David Cryer as Andre and Firmin, respecitively. I have seen Andrews before, and have seen Cryer 6 times total. I have respect for what these men have committed to the show, but they really should move on if this performance was the kind they give often. They are no longer working as emotionally alive actors, are both anticipating the next moments, and are completely disengaged in their bodies. Their work at the beginning of each Manager scene was boring because they lacked any real stakes in the matter...it made the whole threat of the Phantom much less heightened because they could not commit, and it thus led their jokes to being very unfunny.

Liz McCartney (Carlotta) was sick, and her opening cadenza at the Hannibal rehearsal did not come out as she had hoped. Janet Saia played the role from the First Managers' Scene. McCartney put in some great work during Hannibal, though, and I would have loved to have seen her through the whole show. Saia was really good...she shined better in Act II, but I think that's because she was pretty much thrown on during Act I, and that's always a trip to go through!

Cristin J. Hubbard (Mme Giry) is a delight in the role because she brings a lot of humor to it, instead of playing a Gothic quality. Such a joy to watch her have a blast up there.

(Note to Stage Management-Please cover up Ford's back tattoo...it can be very much seen during Masquerade.) 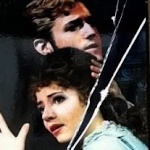 Thanks for the review! Interesting things to read about concerning MacLaughlin's Raoul and Ford's Christine. I haven't heard many reports about them in the past so it's nice to hear what their interpretations are like.

Thank you for a super interesting review! I want to comment on almost everything, but... I won't.

I totally agree about the Phantom/Raoul comment, though. If these men are equally strong, and the Christine is good, it's like an entirely different play. That's how I prefer it, and judging your comments that's definitely how it's currently done on Broadway.

Too bad about Carlotta and the managers, seems like the performance never found it's... rhythm, for different reasons. And ha-ha about Sara Jean Ford's tattoo in Masquerade!

Who is the current Broadway Meg, and how did you experience her in the role?

The current Broadway Meg is still Heather McFadden, actually! This was my fourth time seeing her in the role, and she is still very present and works with great simplicity. Lovely to watch.

Operfantomet, if there is anything more you'd like me to expand on in regards to the performance, please ask! I can go on and on, but I try not to without prompting.