Hello everybody! It's nice to be a new member of this phantastic forum and to meet you all

I thought of opening this thread on the forum after I realised no one opened it before on any web platform. As we all know, the Persian published Erik's death in L'Epoque. When I reread the book, this thing made me quite curious... if one had access to the L'Epoque newspaper units published between 1875 and 1900, could he find this announcement? I tried to do some research on the BNF Gallica website, but it seems the only available L'Epoque newspapers are L'Époque ou les Soirées européennes, L'Epoque commerciale, industrielle et littéraire and L'Epoque illustrée. The last one seems like an illustrated version of the newspaper, from 1860's, only 4 units available. But the actual L'Epoque newspaper cannot be found on the website.
What do you think or know? Did the L'Epoque newspaper ever exist? If yes, is there any archive of the units published in the period mentioned above? 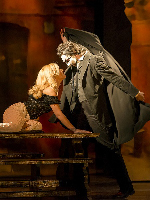 Hi EricaOp, welcome to the forum.  I'm afraid things are a little slow on here.  We all still miss the old "phantomoftheopera.com," which closed last year, and was a very active forum for many years.

As far as "L'Epoque" goes, I don't think it's certain whether it was a real newspaper or not, although my guess is not.  Leroux was quite capable of bending the truth to suit his purposes, and even if you found archives of a newspaper of that name, I'd be astonished if you found the "Erik is dead" announcement.

I tend to think of Leroux's Paris as a fantasy creation which partly, but not completely, overlaps the real Paris.  That way I don't get disappointed if something he says turns out to be fiction, not fact.  I did once go through the book looking at all the things he says about the lake, to find out at what point his version does not match the real-world lake.

But I don't think that's a problem.  I know Leroux starts off by saying, "The Phantom of the Opera did exist."  But I just take that as being a fashionable "style" for novels at the time.  I read the whole thing as a work of fiction, one interesting and creative enough to have stood the test of time.  Certainly some things in the novel, such as the Paris Opera House, exist in the "real" world, and that adds richness to the story.  However, I think some people work too hard to prove that all of the story is real, and are setting themselves up for disappointment.  But by looking at newspaper archives, you are investigating real history.  Whether or not you find the announcement that you are looking for, you will be getting a better feel for 19th-century France, and I'm sure that will help your enjoyment of the story.

It's not a real newspaper (and there never was a disfigured guy called Erik who terrorised the Palais Garnier during the 1880s, in case that was in doubt). Leroux used to refer it in a lot of his novels (particularly in his Rouletabille novels), not just in Phantom. Soz.