Anyone up for some photoshopping/graphicing?

Thing is that I have a friend who's crazy about Hercule Poirot (David Suchet episodes in particular). For Christmas I have made him two chocolate boxes, based on the episode "The Chocolate Box". Essential for that episode is that two boxes, one green and one pink, has had their lids swapped. This puts Poirot on the idea that the chocolate might have been poisoned. The lids have very noticeable labels saying:


There's black leaves or similar in the corners, and a tan ornamental frame around a white/offwhite center. Over the "St. Alard" there's also a little scroll. The St. Alard letters are slightly art nouveau in style, or at least with nice curves, and they're dark red. I suspect the rest of the letters are black. There's also an ornamental line under "Bruxelles".

Anyone who's able to make me something similar? It doesn't need to be identical or very big, just something to make him recognize it or at least be convinced for a couple of minutes... OK, I know it's a bizarre gift, but he'll love it.

I don't have exact measures, but the boxes are a bit shorter (but more or less as wide) as the picture underneath.

This is the best picture I was able to make through screencaps:

Thank you for your help! (You know who you are).

I know that this topic is very old but... Were you able to make this box? It's not difficult to make it with photoshop. If you still need it I can help you (?) 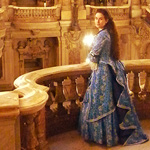