Blaidd_Drwg wrote:
You should definitely watch from the first season! Christopher Eccleston is a seriously underrated Doctor, in my opinion. The quality of the first season compared to even the second season isn't that great, but the acting is top notch.

I will second the Eccleston love--he's what got me hooked onto the new series. It's a pity he only stayed on for one season, but he made it count where it matters most. "Dalek" and the two-part season finale are particularly fine examples of his talent.

Completely agree. I have friends who started watching the show and completely bypassed the first season because they wanted to get to David Tennant. As much as I love Ten, there's no reason why Nine should be overlooked. The two-part season finale was amazing, especially the last half hour of the last episode. As much as I love Steven Moffatt and his timey wimey stuff, I really miss simple story arcs like the whole Bad Wolf bit. Ah well.

I have to admit, I was a bit disappointed in the most recent season. I got a bit tired of Moffat's season-wide story arcs and so much emphasis on the timey-wimey aspects. It's funny, all of Moffat's earlier episodes from seasons 1-4 are my absolute favorites, yet now that he's been in charge of the whole things I haven't liked it as much.

Oh, and just because: 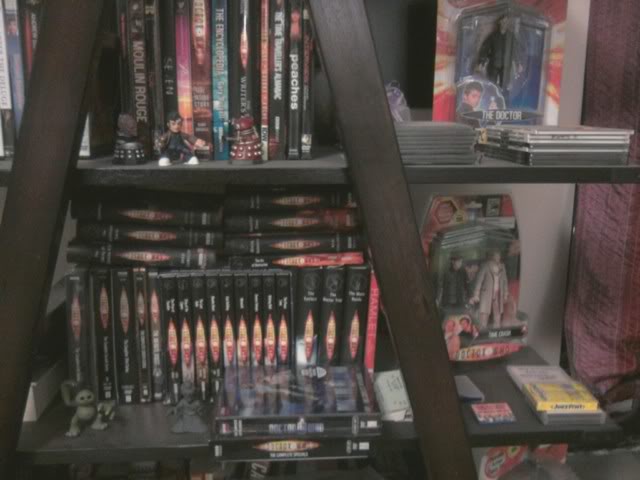 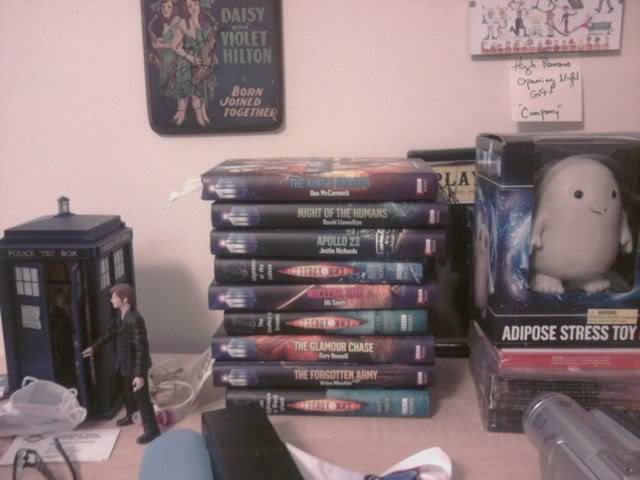 ::picks up jaw from ground:: The amount I envy you right now is beyond okay. I especially love that David Tennant action figure right next to that mini TARDIS. Amazing. Absolutely amazing.

And yes! I love "The Empty Child/The Doctor Dances"! I think those are the ones that sold me on the show. Perfect examples of Eccleston's acting skills. "Everybody lives, Rose! Just this once! Everybody lives!"

I agree. As much as I love Matt Smith as the Doctor, this season was completely overdone. He's definitely getting too carried away with story arcs concerning wibbly wobbly timey wimey things and this season's finale was done in almost the same format as the ending of season five, but it wasn't nearly as good. It ended and I felt hugely unsatisfied. I felt like I had just finished watching Lost or something. I had all of these questions that I wanted answered and if they were answered, the answers were really mediocre.

I did think this season had some good standalone episodes though. "The Doctor's Wife", "The Girl Who Waited", "Let's Kill Hitler", and "The God Complex" were all pretty entertaining in my opinion. And I know I'm probably in the minority, but I'm really excited that Amy and Rory left. It's not that I didn't like them, but I feel like they were around for a good two seasons and now it's time for someone new. Hopefully that will send the show in a good direction once more.

Just thought I'd share this. I think it's absolutely brilliant.

Netflix just updated to include last season! I can finally be caught up with everyone else, YES.

Sometimes I forget how wonderful the episode "Let's Kill Hitler" is https://www.youtube.com/watch?v=rlQrbahzbno&feature=related

Finally got caught up with Series 6 -- I don't get BBC America, so I have to wait for the Netflix rentals. I adored it, especially "Let's Kill Hitler," "The Doctor's Wife," and "Closing Time." I do wish they could have done more with the Silence... but perhaps next season (which will be premiering next year, 50 years after the show's debut)!

Who else thinks Stormageddon should be the Doctor's next companion?

That would be awesome! Or Craig and Stormy.

Becky wrote:Who else thinks Stormageddon should be the Doctor's next companion?

No seriously, I'm still catching up.