I was wondering if anyone has a list or knows of the original understudies for the London production. I know a few like Steve Barton, for instance. It would just be interesting to find out which larger parts the actors who were playing smaller parts in the original cast covered.

Maria Kesselman understudied Sarah Brightman as Christine. Being both a wonderful soprano AND a classically trained ballerina, she was quite ideal. She also served as alternate a couple of weeks when Brightman was out and Claire Moore was bumped up to principal.

I read some time ago that Patricia Merrin, ballerina and dance captain of the original production, also understudied Mary Millar as Madame Giry. Merrin has served as the associate choreographer for international Phantom productions since very early on, so she has kinda become a Madame Giry herself.

And yes, Steve Barton understudied Michael Crawford as the Phantom. Or at least he did step in to perform the role at a very short notice when Crawford injured himself. He later took over the role after Crawford on Broadway, after having performed it many times in the West End.
_________________
JOSEFINE TO THE PHANTOM:
You come off as... somewhat... rough...

Thanks for that, I didn't know about Patty Merrin playing Madame Giry. I've recently found out that Piangi was covered by Barry Clark (The Auctioneer) and David DeVan covered Andre. Keep 'em coming folks if you know of anymore!

I recall David Firth (original Andre) playing Raoul for about six weeks in London when Steve Barton was injured whilst playing the Phantom when MC was off with a hernia.
I think that Yvette Davies understudied Rosemary Ashe as Carlotta, also.
OG

Yep. Firth was the first dark-haired Raoul, according to the Tylor book. There are even a couple of pics of him in it

operafantomet wrote:[Barton] later took over the role after Crawford on Broadway, after having performed it many times in the West End.

Well, not directly. Timothy Nolen and Cris Groenendaal (the original Andre) were in the role between MC and the sadly underrated Barton.

operafantomet wrote:[Barton] later took over the role after Crawford on Broadway, after having performed it many times in the West End.

Well, not directly. Timothy Nolen and Cris Groenendaal (the original Andre) were in the role between MC and the sadly underrated Barton.

Don;t forget I believe the guy that was Passarino on the OLC was also Phantom Understudy.

justin-from-barbados wrote:Don;t forget I believe the guy that was Passarino on the OLC was also Phantom Understudy.

Peter Bishop who was the Slavemaster was understudy for Raoul, presumably 2nd cover. 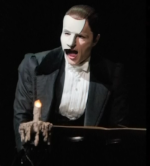 I've always been interested to know who covered Firman when John Savident was playing him in the first 6 months and also if the two old guys covered anyone, Janos Kurucz (Buquet) and Mostyn Evans (Policeman). I'm presuming they may have done as there were not that many guys in the original company before they brought a couple of swings in after a few months.

London-Phan wrote:Peter Bishop who was the Slavemaster was understudy for Raoul, presumably 2nd cover.

That's interesting. I don't think I've ever seen the Slavemaster understudy another non-dancing role before.

Another understudy from the original cast. Janet Howd who played someone in Don Juan triumphant was the first cover for Madame Giry. If anyone else knows of any others, particularly who covered John Savident as Firman, it would be great if you could let me know!

Another one to add to the list. The original understudy for Joseph Buquet was Mostyn Evans.

Another few understudies to add to the list from the original London Cast.

David Jackson was the 1st cover for Joseph Buquet and Mostyn Evans was the 2nd cover. Along with this Mostyn Evans covered other parts as required.

The 2nd cover for Monsieur Andre was James Paterson

So it looks like nearly all of the principal understudies have been listed all except 1st cover Piangi and 2nd cover Carlotta. I wonder if many of those understudies actually went on, i would say most of the 1st covers will have gone on. I believe that Steve Barton only went on once as the Phantom, he could only manage the one show because of his knee injury.

1st cover for Piangi was Barry Clark (auctioneer). Looking at the female ensemble and what they'd done previously etc I would take a guess that the 2nd cover for Carlotta would have been Peggy Ann Jones. She played wardrobe mistress and the confidante in Il muto.

I think most 1st covers will have got on due to holidays at the least. David Firth and David DeVan got on as understudies a massive amount due to Barton's injury. I don't know if Steve Barton only made the one understudy appearance as the Phantom. It is rumoured and probably is right. James Paterson played the Phantom more than Barton in that period.

As far as the 2nd covers I would guess a lot would have got on. Paul Arden Griffith tells of when he went on quite early in the run as Piangi. They hadn't got a fat suit made for him and he had to wear John Aron's costume with a duvet and pillows bulking him up. As he disembarked the elephant at the end of Hannibal the duvet and pillows fell out on to the stage leaving him looking like a shrivelled mess. Apparently the audience thought it was part of the act and thought it was hilarious.

Yeah what I heard was that he had a rehearsal to go through some of the technical stuff. He injured himself on the masquerade trapdoor, aparently he didnt bend his knees and badly twisted his knee. He went on for the evening with the aid of a walking stick. The day after was a matinee performance and they persuaded Michael Crawford to come back for the two shows highly sedated. It was the day after that Paterson had enough rehearsal time to take over. Utterly geeky knowing all that but really interesting stuff!

Yeah and between the matinee and evening show Crawford coughed up blood! I'm surprised he managed both shows to be honest, and I'm not sure if it was the afternoon or evening show but he also nodded off while he was in the angel, I presume from all the medication lol!

Mr. Crawford certainly has some stamina (all stage performers do - especially the swings and understudies who cover multiple roles and have more rehearsals). I think that was my biggest black to pursuing a career in theatre: I'm a sickly wimp!