I had a very similar first exposure to Phantom. My grandparents saw Steve Barton, Rebecca Luker (or Katherine Buffaloe?), and Davis Gaines on Broadway in 1990, and brought back the Playbill and a copy of the OLC Highlights on casette, which I wore out.

Great to see these answers. I hope your computer cooperates more in the future.

Awesome video once again! 'Twas cool to hear about your early Phantom experiences. And yeah, hopefully, your computer will be more cooperative for the future videos. ^_^

Thanks so much for the video I look foward to your videos. Hopefully your computer is fixed soon and we get some more anwers soon

Here's another video! Hopefully, the computer problem is fixed.

Thanks for answering all these questions, Brianne

I'm definitely with your mom in measuring all Phantoms against Crawford - even if I never did get a chance to see him live!

I imagine many phans got their start through the OLC and the Perry book. I myself started only with the cassette tape and the pictures in the fold-out sleeve, so the music was what took hold of me first. I even got my first bookstore membership card to buy the Perry hardcover which only fueled the fire until I got to see the show for the first time about a year later.

I also like your answers about what you like about the story. Christine's evolution as a person is a core element that's rarely mentioned by phans.

Hey Brianne thank you so much for taking the time to do these videos and anwer over questions.
My next question!! Do you have any rituals or things you go for good luck before a show?
Also not so much a question..but do you have any stories about bloopers or funny stories while you have been in the show?

I was wondering if you could have a list of Ballet videos performances that you would recommend,

and another wonderful video catalgue: www.kultur.com has wonderful ballet and opera videos,, also the have some live broadway performances, and some stuff on musicals, not much though

Which dance is technically harder for you and most ballerinas to pick up,

the Hannibal Ballet or the Il Muto Ballet

When you do get to play Christine, how would you play the Don Juan Point of No Return, how soon will your Christine know that it is the Phantom

Dear Brianne, one more question, would you be able to sing for us both parts of Angel of Music, if possible,

How do you break in or soften your toe shoes,

Yet again thank you again,

When did you start dancing en Pointe, at what age

How is it to be nominated best featured actress in a musical? And have you been nominated for awards before?

A little outside of the phantom realm of questions...

Sorry for the long delay in answers. I got very busy here.

So lets start with LisaL's questions: I say a silent prayer to myself before I go on. When I'm really nervous I say a longer prayer and end it with the sign of the cross. I also have some coins and a cross on my dressing room spot for some protection. As for some funny mishaps, I have a couple:

-Twice I have knocked the monkey over getting the cape off of the chair. It wasn't my fault that the cape was caught on him.
-In our third month, my Hannibal beads on the top of my costume got caught on the fishnet part of the Hannibal scrim and I spent the first part of the dance number trying to get my "chest" undone. (something I didn't accomplish until the goliwogs and wild women came in)
-I've sneezed three separate times in the beginning of Prima Donna. "Senora, no!" *sneeze* "The world wants you"
-My Il Muto ballet wig has come off in the middle of the dance. I caught it "mid-flight" as I was turning by some sort of luck. My pointe shoe has also come off in the middle of the dance.
-I tripped getting the scarf in Hannibal, slid and finally came to a stop in the Wardrobe Mistress' dress.
-I have tripped on the stairs at the same time that Mme. Giry also tripped. In an attempt to help her up, we managed to take down the butterfly and the man/woman with us. When we got off stage, we realized that we almost took out the whole center section of the dance corps.

Ladygodiva: When it comes to videos, it depends on personal preference. What I like isn't what someone else likes. You can't go wrong with Royal Ballet, Australian Ballet or American Ballet Theatre. They're all great. I know Kultur videos very well. Most of my collection is from that company.

I don't know about most of the ballerinas, but Hannibal was the harder one for me. Il Muto is very much like a classical ballet, so I was use to it when we set it. Hannibal was a little tougher on my body and therefore I had a mental block on it. lol!

I started to dance on pointe when I was 11 1/2. I usually brake my shoes in by putting them on, going up on pointe and "stepping" on the heel of the shoe so it breaks at my arch. I also step on the box to break in the half pointe line and I have bang the shoes on the cement to make them a little quieter for running.

Operafantomet: It's an honor to be nominated. I really was excited when I saw my name. This is the first time I have been nominated for anything awards like. Right now I'm loosing to one of the Jersey Boys girls, but I'm on top of my "Mama" and Carlotta. I'm also up against a great Rafiki, the other two girls from Jersey Boys and a actress from a Rat Pack show here in town. So it's kind of cool to be with some really great actresses.

Christine's Shadow: I went straight to pointe. I highly recommend using demi pointe shoes on dancers that are old enough, but don't have the strength yet to go onto full pointe. It's an important learning tool for young dancers and it'll help them realize what they're bodies need to be capable of in order to be successful at pointe.

Hope that's everything. If I don't talk to you all sooner, have a Merry Christmas and a safe and Happy New Year.

meglett wrote:-I've sneezed three separate times in the beginning of Prima Donna. "Senora, no!" *sneeze* "The world wants you"

OK, I actually laughed out loud of this one. I dunno exactly why I found it so funny, I think it was the mental images. The other stories were funny too, haha.

Merry christmas to you too!

Thank you once again, much appreciated

Guys, don't forget to vote for Brianne in the 2010 BroadwayWorld Las Vegas Awards. She's in second place by only 3%!

Hi Brianne! First off, I like to say I've been lucky enough to see you and the Vegas show twice! Now, myself and some friends are hopfully going to the show's 5th year.. Do you know of any plans for that show? And if you do, can you give us an idea?

Brianne, would you rather have the Meg Giry wig closer to your hair color, you look cute as a button either way, I assume that most productions prefer the color of wig hair to tell Meg and Christine apart faster.

also do you have any fun ancedotes that you could tell us about Gillian Lynne?

CountessDeChangy wrote:Hi Brianne! First off, I like to say I've been lucky enough to see you and the Vegas show twice! Now, myself and some friends are hopfully going to the show's 5th year.. Do you know of any plans for that show? And if you do, can you give us an idea?

Thank you for seeing our production. I'm very happy that you liked it.

I don't know the plans for the 5th anniversary and I won't for a while now.

ladygodiva wrote:Brianne, would you rather have the Meg Giry wig closer to your hair color, you look cute as a button either way, I assume that most productions prefer the color of wig hair to tell Meg and Christine apart faster.

also do you have any fun ancedotes that you could tell us about Gillian Lynne?

I've heard they closed the Phantom store? Is this true? And if it is, why? 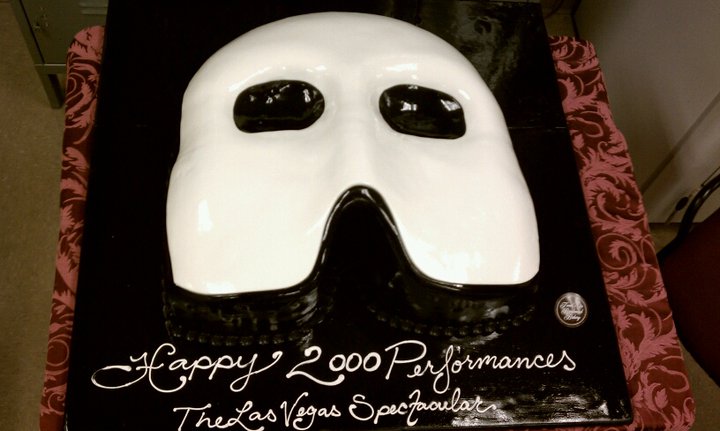 Some friends and myself are planing to see the show in a few months and I was wondering if we could meet you after the show maybe? No dates have been choosen yet, but maybe we could work something out?

Please let me know! Thanks a ton!!

I hear Brianne's now got a side gig as a teacher!

Care to elaborate? You've taught in the past, is it something you've always wanted to go back to?

So this section hasn't been used in a while, so I'll post this here.

I've been meaning to write to you all for a little while, but I've been busy, so here it goes.

The last 6 1/2 years have introduced me to the world of musical theater and have taught me so much. I was blessed to have been selected to be in such a wonderful company with great talent and hearts. I was a Phan of Phantom before I got here and through blogs and Facebook, I came to meet all of you. It has been a pleasure getting to know you all and receive such support. I never thought I would have such a great reception to my interpretation of Meg.

As an actor, you put everything you have into your character to make them as interesting as you can without over doing it. I was so lucky to have your support and kind words in the early days while I was trying to figure out who my Meg was and into the later years when I tried to improve my voice to bring it to the level of the other principals. Your support and patronage is part of what kept the show going for as long as it did. So for that, I thank you all from the bottom of my heart.

Now, I don't know where the next step in my career will be, but I know that I have all of your support and kindness behind me to push on. I'll make sure to keep you all informed on my new adventures. However, The most important thing I want to convey to you is, Thank you. Thank you for everything you have done for my performance, ego and heart. I really do have the best Phans in the whole wide world.

On to the next adventure!

You'll always have our support, Brianne. Be sure to keep us updated about where you're performing so we can be there to cheer you on

Thanks, Brianne, for your awesome work in Phantom and for being so kind and generous to us "sad" folks.

Back at ya, Brianne. Keep being awesome!